Best Cities for International Students in Canada in 2022
Contact Us

Canada has attracted many new immigrants from all over the world because of its natural environment, its highly tolerant and open attitude toward immigrants, and its high level of welfare and diversity. In addition, Canada has always been known for its high quality of education and convenient graduate policy, which makes many international students choose to study in Canada.

Canada also offers a wide range of options for international students. These range from traditional universities to technical institutions, and from small communities to first-tier cities.

When choosing a university, international students need to consider not only the academics and campus life, but also the unique characteristics of the city where the school is located. For example, living expenses, employment, and immigration policies, etc. After all, many international students are immigrants, so the choice of a city becomes one of the primary consideration.

In March of this year, online learning provider Preply ranked the best cities in Canada for universities. It is worth noting that according to the ranking, the best university city in Canada is Regina, Saskatchewan, second is Winnipeg, Man. and third is London, Ontario. 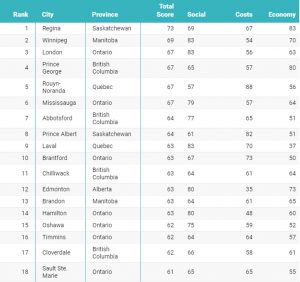 According to the above data, each town has a total score of 100 points, 100 points is the most favorable conditions for university students.

The social environment is also determined based on six indicators, including the diversity of the city, the overall crime rate, the number of parks, shopping centers, cafes and nightlife venues. Economic opportunity is assessed based on average net monthly wages, GDP per capita, employment rate, unemployment rate, purchase price of apartments, and mortgage rates.

Although Canada’s overall population density is relatively low compared to other study abroad destinations such as the United States and the United Kingdom, it also offers many academic opportunities in the community. On the other hand, the size of a community does affect the cost of living. For example, students in major cities such as Toronto, Montreal, and Vancouver generally pay higher tuition and daily expenses, and have more employment opportunities.

In smaller cities in Canada, such as Regina, although there are not many choices of schools, each school has its own characteristics and specialties, and the learning and living environment is more quiet and suitable for studying. At the same time, Regina is located in the province of Saskatchewan, the living standard is relatively low, the same quality of life is much lower than the cost of first-tier cities, is more suitable for students or immigrants to live after graduation.

According to new data from Statistics Canada, Saskatchewan has one of the lowest annual unemployment rates in the country. The most important thing is that Saskatchewan has more nominations and lower requirements than other provinces. Many Chinese have immigrated to Canada in recent years through the Saskatchewan Provincial Nominee Program and have successfully obtained their Maple Leaf Card.

These are the best cities for international students in Canada in 2022. Knowing more about local life before you immigrate will help you in your future life as an immigrant. Simard & Associates brings together a team of experienced immigration consultants to help you overcome immigration barriers and find your ideal home abroad.